How To Use Battle Ropes? Beginners Guide!

In this beginner’s guide to battling ropes, we will teach you how to use battle ropes. This terrific piece of equipment is gaining popularity for a reason, as it is useful for fat loss, but also for building muscles, particularly abs. We will explain how to use battling rope, and also give you more reasons to consider using them on your next workout.

How To Use Battle Ropes?

When you look at professional CrossFit athletes use battle ropes, it seems almost like juggling, something impossible to do. However, while battle rope training looks fancy, they are fairly simple to use, if you follow a few basic rules.

Also, there are many variations to try, which we will cover later. You should definitely switch things up often, as battle ropes are a great opportunity to train your whole body, even some unused muscles. Most workouts focus on either on core, upper or lower body muscles. Once you master the technique, you will be able to move on to more advanced movements.

Battle rope combine both cardiovascular and resistance exercises allowing for both fat burn and muscle toning.

Battle ropes are unique as more loose they are, the better the workout. This is almost exactly the opposite of most exercises, where you should keep everything as still and as tight as possible.

The reason why it is harder when the rope is loose is that it takes more energy to create a wave, as you have to swing harder. But because of this, the wave will return more energy too, so the closer you are to the anchor, the harder it gets.

This also saves your shoulders, as less force is directly on them when the rope is loose. Battle ropes have a bad reputation as “shoulder busters” but only because people misuse them, keeping them too tight. Keep them loose when doing battle rope exercises, and your shoulders won’t hurt.

While you want to stay nice and tall, you shouldn’t freeze up. Allow your hips, feet, legs, shoulders, and back to “dance” a little. Don’t resist the force created by the ropes at all costs. Of course, stay under control, but don’t be too stiff. Hold the rope firmly, but just with enough force to keep it under control.

While doing alternating waves is great, you should use battle ropes in all directions. In fact, they are one of the rare exercises that let you target your rotational strength.

Lateral waves will hit your hip, obliques, and core, and moving them in circles will hit shoulders more. Emphasizing different options will give you a full-body rope workout, which is amazing, considering it is only a piece of thick rope. You can also try different ropes. The thicker and heavier it is, the more challenging the workout you get.

This is huge, as training rotational strength is something that even athletes forget to do. We all move in sagittal, and sometimes in the lateral plane, but rotational patterns are often neglected. WIthout training all movement types, you will have holes in your strength and performance.

You can also change body positions. Try standing, kneeling, sitting, plank, or moving laterally while performing battle ropes. If you sit, you take out the legs, hitting your core and shoulders harder. Standing and moving variations train your whole body more.

You should train with battle ropes at various intervals. Going all-in on short bursts with maximal force will train you anaerobically. Going for longer than two minutes with a lower intensity will train your aerobic capacity. If you keep it between 15 and 90 seconds, you will use the glycolytic energy system. So, battle ropes train all energy systems, giving you an incredible conditioning workout, in the shortest time possible.

With battle ropes, there is no traditional bracing, you should breathe normally. Of course, as you pick up the pace, your breathing will speed up too, and you will find yourself having trouble catching your breath when you go extra hard.  But never try to hold your breath throughout the whole set, it will do you no good. 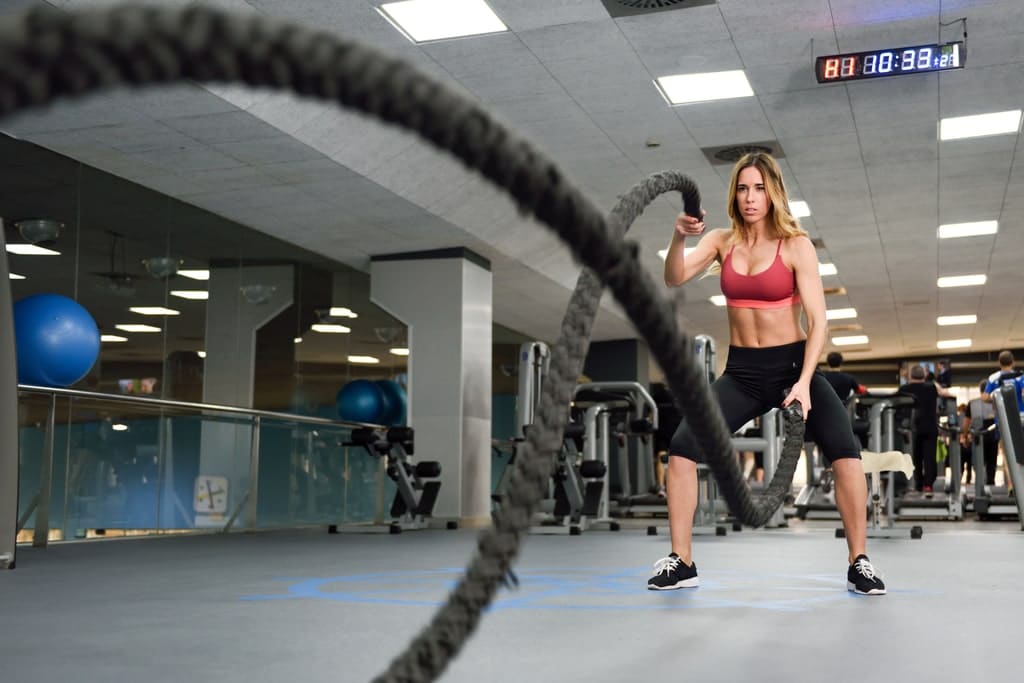 They require you to use both hands and feet at the same time, practicing not only coordination but using both brain hemispheres. This makes them an excellent tool for training your central nervous system, an essential part of our organism.

Battle ropes are also unique as they have no “eccentric” part. That’s the part where muscles stretch under tension, for example, when lowering down the weight when doing a biceps curl.

While this is very good for hypertrophy, the eccentric portion of the lift creates muscle soreness. And when you are sore, you are unable to work out with full capacity for 2-4 days, and your overall volume will suffer.

Battle ropes correct that, as they eliminate the eccentric part. This allows you to workout longer, and more often, leading to better gains.

Battle ropes are a terrific way to completely recompose your body, just by doing a single movement. They torch calories, enabling you to lose weight. But, at the same time, they train your muscles, which mean that the only thing you will lose is fat. And because they engage so many muscle groups at once, battle ropes will help you build even more muscles. So more muscles + less fat, that’s what makes battle ropes a very effective form of training.

Battle ropes are unique as they are a form of cardio, but for the upper body. Most other forms of cardio and conditioning focus on legs, such as running or cycling. Other, like rowing and elliptical, involve arms, but still, use leg muscles to a greater extent.

Battle ropes allow you to work on your conditioning just using your upper body. This will translate well to mane day to day activities, but also to sports. Combat athletes love battle ropes, as they help them prepare to the ever-changing conditions of live fighting.

Battle ropes are a very fun and challenging way to train. Creating waves is cool, and it looks great too. Once you master battle ropes, you will be able to do some cool tricks with them, at high speeds, which will definitely attract attention, and give you an excellent workout.

Whether you are exercising with battle ropes waves, pulling, lifting or doing isometric holds, battling ropes will go a long way to helping you to enhance your agility, balance and stability. This is due to the power of dual force dynamics which benefits your physiological, musculo-skeletal and nervous systems. Doing power slam, wave and hand palm facing type exercises also boosts a person’s mobility. It will increase the mobility of the person’s grip, core, hips ankles and shoulders. This will dramatically improve their mobility when performing functional fitness exercises.

They will help you practice coordination, but will also fix any imbalances you have created over the years. It is natural for your dominant side to be stronger, but too much of that difference can create problems or even injuries.

Because battle ropes require both sides of the body to work simultaneously, but not together, they will expose weaknesses and imbalances. Gradually, you will notice the improvements.

Also, check our article on other major benefits of using battle ropes.

Battle Rope – A battle rope is a fitness training device that is used to provide aerobic and anaerobic fitness benefits. It creates load through static and dynamic movement patterns.

Anchor – The anchor is the fixed object that the rope gets connected to in order to perform static, wave or pull movements. You would normally be facing the anchor

Wave – A wave is a continuous movement of the rope in a steady tempo that creates a wave like pattern.

Wrap – This is when the rope is wrapped around the anchor. The greater the wrap, the more friction, force and load that is created.

Pulling Exercises – Pulling exercises can be performed when the battle rope is wrapped around the anchor to produce various loads on the body.

Static Exercises – This is when you use the battle rope to engage the body isometrically.

The benefits of battle rope exercise have been discussed and hope you appreciate how it can benefit you from using for an extended period of time. It is a useful fitness tool and an excellent beginner battle rope workout for cardio. For those looking for a battle rope workout guide read our article 6 Best Battle Ropes HIIT Workout Routines.

For those with gym memberships battle ropes should be a standard piece of equipment. However, you can also consider buying battle ropes for your home gym should you have the right space and don’t go to the gym. Overall the battle rope movements, with your arm independently working of each other, are designed to improve your fitness level. Go give it a try!

Are Exercise Bikes Effective For Weight Loss? Top 7 Reasons To Use Them!

Are Exercise Bikes Effective For Weight Loss? Top 7 Reasons To Use Them!

How to Use a Cross Trainer the Right and Proper Way?

How to Use a Cross Trainer the Right and Proper Way? 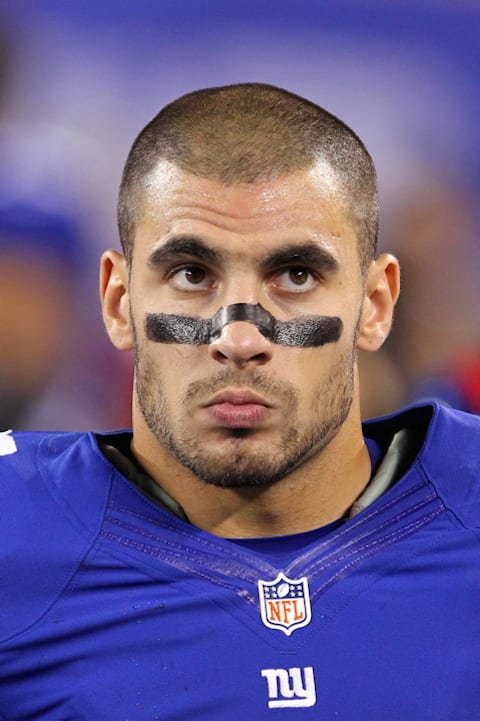 Joe Martin is a NASM (National Academy of Sports Medicine) Certified Nutrition Coach (NASM-CNC) and Certified Personal Trainer (NASM-PST) with over 15 years’ experience in personal training and nutrition. Joe was also a former New York Giants Football Player and has his own fitness website Jerseyjoefitness.com