How many calories does the burpee exercise burn ?

How many Calories do Burpees burn?

Burpees are one of the most popular and commonly used ways of burning some extra calories, especially popular with individuals who partake in high intensity training. It is hard to precisely say how many calories will be burned by one burpee, as factors such as your weight, age, sex and the intensity at which you are performing the burpees will massively influence the final result. That being said, Harvard Health has published this article where it says that 30 minutes of moderate training can burn 130 – 190 calories, depending on how much you weigh. 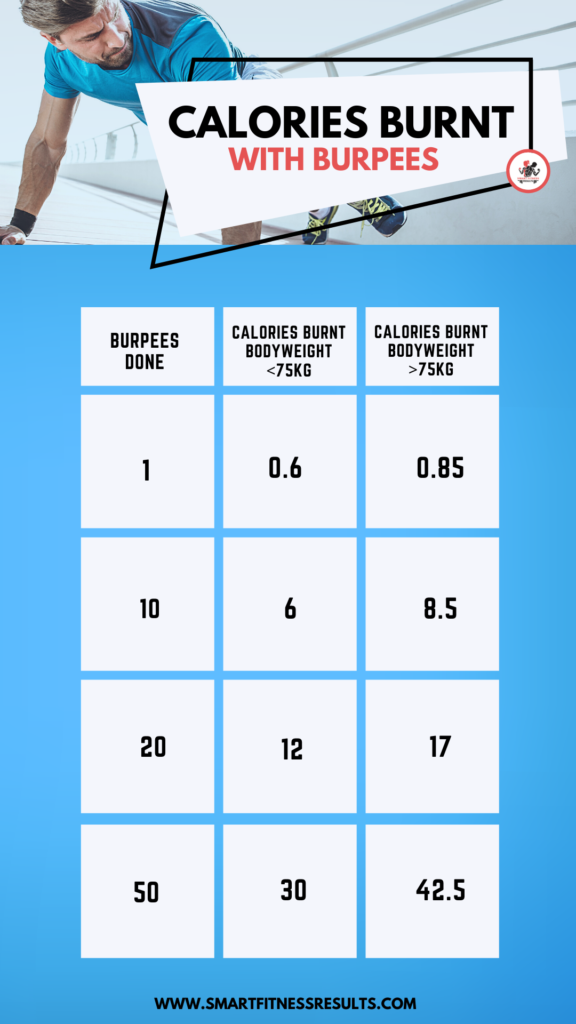 How to do a Burpee

The burpee (although hated) is one of the simplest and most efficient ways of going at a high intensity cardio workout. All you really need is an open space, and self hatred. Jokes aside, people hate the burpee because it’s hard. People dislike doing hard things, but if it were easy the payoffs probably won’t have been as good.

It is important to remember that burpees aren’t for everyone, and if you have issues with joints or muscle strains, you should be extremely careful.

Which Muscles does the Burpee work?

The burpee is a whole body exercise. This means that it will work quite a few muscles in the body, and will be great for health, conditioning, and fat loss. Here are the muscles worked whilst doing a burpee:

As you can see, the burpee works a tremendous amount of muscles and thus proper form needs to be standardized and followed.

As I just mentioned, the burpee needs to be done correctly because it is a full body exercise and requires a good amount of concentration, especially because you’ll get tired whilst doing them. Here are some mistakes to avoid:

About the author  Steve

Steve Theunissen is from New Zealand and is a qualified Personal Trainer and Nutritionist with over 30 years experience. Read more about Steve in the 'about us' page.