How many calories do you burn with push ups ?

The amount of calories you burn doing anything really depends on a large amount of variables, metabolism, muscle mass, age, sex, and even which foods you eat. That being said, you can expect to burn between 0.3 – 0.5 calories per push up. That being said, the intensity and duration of which you do this and any exercise does influence calories burned, as shown in this article by Harvard. 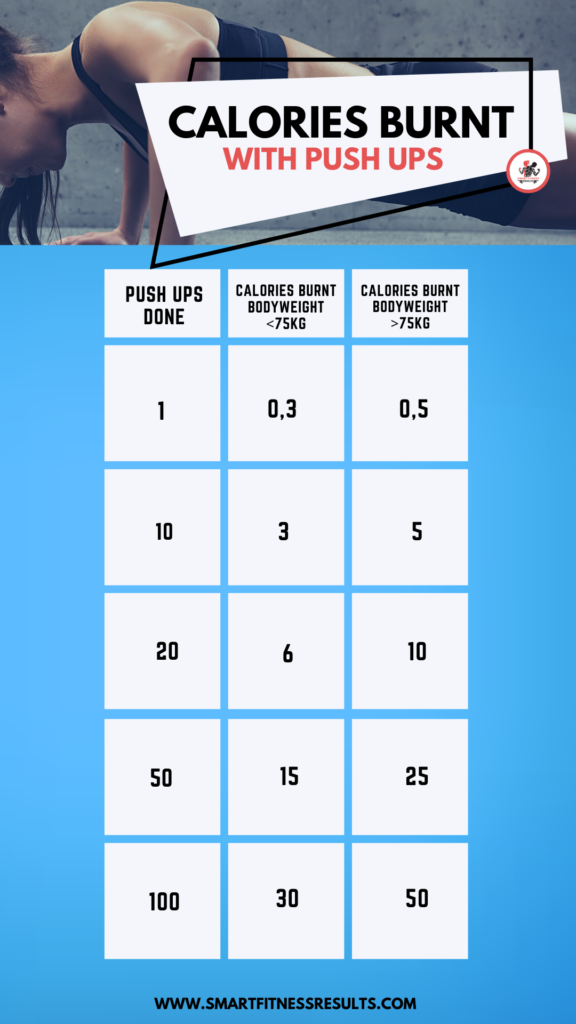 * This is just an estimate, as other variables will determine the precise amount.

How to do a Push Up

Muscles Worked during a Push Up

The push up is a great compound exercise that works a variety of muscles, listed below:

The push up falls under Pushing movements that focus on Chest, Shoulders, and Triceps.

The biggests mistakes we see when people do push ups is either going to be at the elbow joint, or a breaking of form in the body.

Other Variations of the Push Up

The push up is one of the simplest and greatest exercises, and there is even a possibility of altering the exercise to target different muscles, burn more calories, or just make the exercise harder!

By allowing your hands to be further apart from one another, you will target the chest more. This does place a bit of a strain on the shoulders so be careful. This push up variation doesn’t seem to burn any more calories than a normal push up, but is great to incorporate into a full chest workout.

The name can be a bit confusing, because actually your feet are elevated in relation to the rest of your body. Asume the normal push up position, but place your feet on a raised object like a chair. This will target the upper chest and front deltoid more than a normal push up. It will also burn 15-25% more calories per rep due to your muscles being overloaded more.

As the name suggests, there will be “jumping”. This variation is not for beginners, so proceed with caution. As you press up with a normal push up, at the end propel your body and hands off the floor, clap your hands, and put them back under your body before you fall on your face. It’s a lot. Plyometrics have been used by athletes for years to increase max output. This will also burn 30% or more calories than a normal push up.

About the author  Steve

Steve Theunissen is from New Zealand and is a qualified Personal Trainer and Nutritionist with over 30 years experience. Read more about Steve in the 'about us' page.